A full list of diary dates have now been set, and the committee would love as many people as possible to attend or be part of the activities planned throughout the year.

View the fixtures, fundays and visitors matches to the Club, by either downloading a copy of the fixtures here or go to the Diary page for the full list by month.

It’s great to see people have been recording their games in the clubhouse folder and participating by moving names up or down the ladder, according to result.

It is with sadness that we recently heard that Pam passed away after a short illness on 4th May 2017 aged 99 years. Her son Rupert got in touch with the sad news and said that Pam always remembered her happy days playing croquet at Stony Stratford and often talked about those times. He wished us well as a club, something I’m sure Pam would have endorsed.

Some of you may have noticed the Croquet Association Diploma which is framed and on the wall in the club-house. This was awarded to Pam for her many, many years of service to the game and to our club and she features in many of the photographs in the club’s albums.

I’m sure many of you will remember Pam with fondness for her indomitable spirit and that never to be forgotten cry of anguish when her shot didn’t quite go where she had intended, not that it happened that often.

The next SSCC is to be on Wednesday 8 March in the Bowls Club, beginning at 2pm.

The victorious team of Marian Holland, Jackie Berry, Liz Bulbeck and Robert Chipperfield returned with the coveted trophy after a gap of six years since SSCC last won. They beat Letchworth on Sunday 2nd October at Hunstanton Croquet Club in a thrilling final play-off match, the score being 9-9 after normal time.

Congratulations to all four of them, two of whom were making their League debuts this year.  Also a special mention to all the other club members who played their part in earlier league matches to get us where we are now. This particularly applies to John Burridge who missed out on the Final as he was on holiday – this will be a great send-off for John as he leaves the club and moves up north to be nearer his family.

Please give the team a special “pat on the back” when you next see them and maybe next year we’ll be brave enough to enter two teams, such is the current strength of the Club.

The team and their loyal supporters travelled through torrential rain to a wet Hunstanton on the Saturday before the match so they would be ready bright and early to meet Letchworth for the EACF regional final of the year.

After an even wetter evening they were a bit apprehensive about how wet the  Hunstanton Croquet Club pitch would be? But as the sun rose and shone over North Norfolk the pitch began to dry out ready for our illustrious 4 to do battle!

The score after the doubles and first round of singles was 5-1 to SSCC. Clearly, lunch had a disastrous effect on the team, but they pulled themselves together for a thrilling tie-breaking doubles game with Jackie & Robert winning by 7 hoops to 3.

The SSCC team were  supported by a magnificent total of 6 supporters as they watched the match, which was played in friendly manner.  The Hunstanton Croquet Club were also very welcoming. 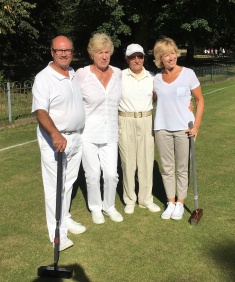 The SSCC team consisting of Jackie, Robert, John and Liz travelled to Watford on 11 Sept. After an exciting 12-6 win, the semi-final match against Ipswich means that Stony Stratford Croquet Club are now through to the Grand Final. This will be held at Hunstanton against either Letchworth or Southchurch Park, once the results of their next matches are known.

Congratulations go to Jackie, Robert, John and Liz plus all the other players who have represented us in the various matches throughout this 2016 season.

Now let’s get practising for the final, as it would be great for SSCC to become the Regional Finalists.

Stony Stratford Croquet Club are through to the EACF semi-finals.

After a hard-fought match with Leighton Buzzard on 19 Aug, winning 10 – 8 this means we have pipped Watford for the top spot.  We had the same points as them but beat them in the head to head, which now means we go through.

Congratulations to the team of Lesley, John Burridge, Robert and Alex who, not only were victorious but, played in the most appalling conditions of wind and rain. This meant the match was very testing after the lovely warm and sunny weather of the past few weeks.

Obviously other members have played in earlier matches, so well done to them too.  Also a special mention must go to Robert who has played in all five matches.

The semi-final is on Sunday 11 September at Watford, so we will be needing to select a team very shortly, hopefully with a view to going on to the Final at Ipswich in October.

“It’s a few years since we headed the Western area group, so well done everyone and it shows what a wealth of steady players we have in the club.”

In our third match of the season in the EACF – Western Area League the team of Alfred, Robert, John, Jackie and Marian fought back from 4-6 down to an excellent win by 10-8, putting us top of the league with just two matches against Northampton Mallets and Leighton Buzzard to go.

Minutes from the 2016 AGM are available to download here

The next AGM is on Wednesday 16th March at 2pm at Stony Stratford Bowls Club.

The Agenda is as follows:

The meeting will be followed by an informal session to allow the Committee and Members to air views on subjects not covered in the formal AGM Agenda to include:

News from the lawns…

News from the lawns…

Has spare mallets so you can play a few games to see if you like it.

Looks forward to seeing you soon